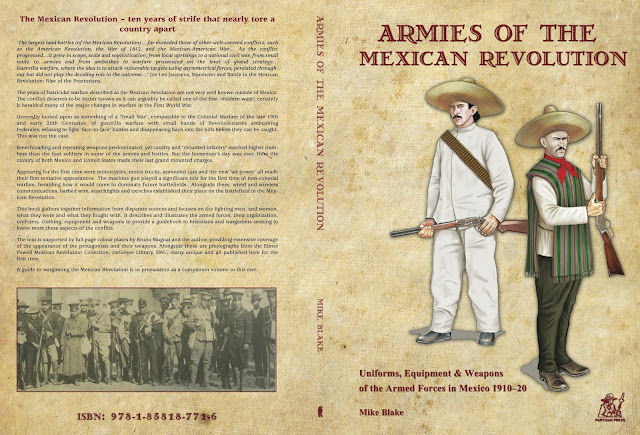 So here we are, only 2 years after the last post. What can I say? Thanks to Louis forguidance on controlling spammers - that should no longer be a problem.

I'm investigating the best way to get my magazine reviews of new figures up on here - I get them back as pdfs - can they be loaded 'as is'? I think Louis may be needed again!

Googling the subject brings up some good stuff  but...I want more! When I am doing a new period I become over interested (some, like my wife, say obsessed) with it and need to be immersed in information. Sad but there it is.

I kept hoping Douglas Porch would make it a trilogy and do it to go with the Conquest of Morocco and ditto the Sahara but it hasn't happened. I can't find my copy of Clayton to see what he has to say about it. Detaille briefly covers it, and so far the best is the reprint of Laurie, which has nothing on clothing or uniforms but quite a lot of brief descriptions of skirmishes and battles. No maps of the though.

I have another reprint of a book about the French in Algeria to try next.

The really good news is that I am no longer ploughing a lone furrow on this one - long time wargame pal Les Bielby-Tipping has joined me. He's now located in Northern France rebuilding a chateau farmstead so has less time on his hands for wargaming, but the idea has caught his imagination and he has signed up to do some troops for both sides - indeed I am expecting details of his french force today as its raining in France and he will get some time to write it down.

Headdresses In The Indian Army

Headdresses In The Indian Army
Major &

’s original article appeared in the BMSS Bulletin No 5 pp137-143 1965 and was reprinted in Chota Sepoy, journal of the IA Special Interests Group. It was a laudable attempt to bring some clarity to this very complex subject. Building on the original, this article seeks to take the study further by clarifying some terms in the original and adding types not covered there.

There were two problems with the table and illustrations in Youde’s original article; some types lacked an illustration and some illustrations lacked text. This has been corrected. The illustrations were not in the same order as the text listing, and this also has been changed. These changes have necessitated the addition of some new reference numbers, but the new numbers have been added within, rather than the whole lot renumbered.

It was difficult to know how much of the original to include as it contained a great deal of essential information. To avoid accusations of plagiarism, the original author has been credited here. Given that few will have access to either version, it has been included almost in full:

‘After the Mutiny, when the shako was discarded, the armies of never again had a standard pattern of headdress. Until the 1880s the pillbox, worn straight or nearly so, was in common use, especially in the Bengal Army, but by 1895 the pugaree had ousted it except in the Regiments of Gurkhas. The wearing of the pugaree was permitted in the traditional tribal or caste fashion of the wearer which gave rise to a very large variety, and in mixed class Regiments to variations within the Regiment itself… The tables that follow are an attempt to solve some of these problems.
(The) classification of the headdresses into twelve main groups is somewhat arbitrary because it can take little note of that most powerful influence of all, Regimental custom. It is applicable primarily to the years 1900-1914. Anyone who has a picture of a Sikh of say, 1885, and another of 1939, will be aware of the changes that took place. Pugarees tended to become smaller and stiffer as time went on and as the use of starch replaced human saliva in the washing. By 1939 in many cases a pugaree was lifted off the head complete as a whole, and was wound only after washing and starching. It was starch that enabled the fringe to stand up straight above the pugaree like a fan, a practice that became common, especially in the old Frontier Force Regiments during the 1920s and '30's.  Unlike the cavalry, the use of a tail to the pugaree was rare in the infantry. Indeed, the only full dress examples known of are those of the of the 63rd LI and 86th Carnatics shown in “Armies of India". They were however worn in service dress at this period by several classes in regiments especially those of the Northwest.
The next problem is the composition of the Regiments themselves. This was always changing and developing slowly as time went on and the supply of recruits from the various fighting races declined or increased. A regiment with 4 companies of Pathans say in 1914, might have had only 3 in 1910. It was a continual problem to maintain a balance. The most marked change in the period of 1895 to 1914 was in the old Madras Army, especially from 1903 onwards.  A proportion of the classes of was deemed to have become unsuitable for real warfare and overseas service. They certainly were hardly ever used in the tough conditions of the Frontier, although they did operate in . Accordingly, numbers of these regiments were disbanded while others were converted complete to the fighting races of the . (The) list is taken from Hart's Army List of 1914.’

A.    Pugarees with Kullah (the small pointed cap, often of contrasting colour, around which the pugaree was wound)

Youde makes no mention of the pag, the small round-topped skullcap sometimes worn under the pugaree by types who did not wear the kullah. It was usually white or yellow and just a small triangle showed at the bottom front in the middle of the forehead. 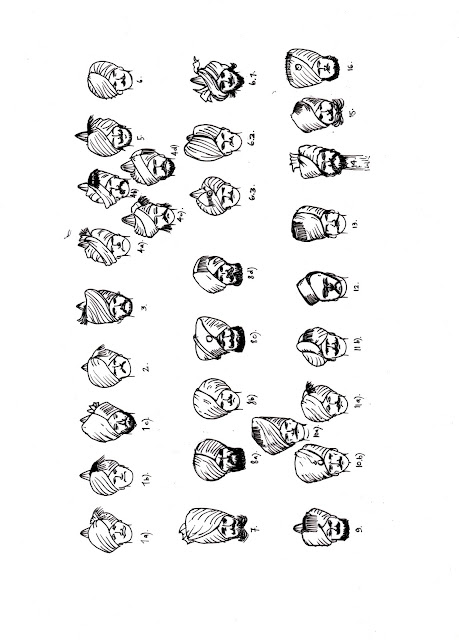 [1] Mussalmans in original.
[2] Spelt both ways in original.
[3] Named in illustration caption but not included in Youde’s text.
[4] Illustrated separately but not included in text; clearly a different style so its inclusion as a sub-type of 1 is rather odd?
[5] New Group; Youde had all 5s together but illustrated what we have now called 5.b) separately.
[6] Original has ‘tall’, which is assumed to be a mis-typing, but could have been indicating ‘tall kullah’?
[7] New Group, Youde included a sketch but no text or group reference!
[8] Youde puts this Class in his ‘B. Without Kullah’ but regiments wore a kullah.
[9] Pillbox hat in Youde’s original.
[10] They are referred to adversely by Col Vaughan, 7th Rajputs, but he does not make clear if this is in reference to his own regiment. It would seem not as he illustrates them in a pugaree.
[11] quotes from Barrows Annual Register.
Posted by Mike Blake at 09:29 No comments:

A drawing I did way back when first considering this period - one of the early Turcos uniforms. 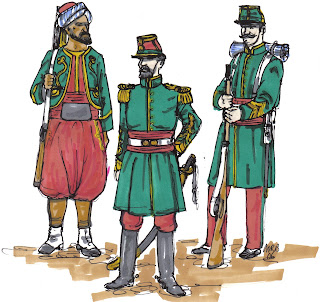 Just found my ms notes, made many years ago in my own handwriting but a style I hardly recognise, from Blunt, W S, Desert Hawk, 1947:

'Abd el Kader's regular army consisted, Daumas tells us, of 8,000 infantry, 2,000 cavalry and 240 gunners.army regulations were elaborately drawn up...greatly assisted by French and other European deserters who had joined his ranks.

"Officers and soldiers of various arms had  uniforms of different colours which were exactly described" said Azan. "Everything was fixed down to the smallest detail, even the quality of the the cloth being stated. The usual headdress was a red chéchia (a kind of tarboosh). Badges included epaulettes, crescents worn on the chest and stripes on the sleeves. inscriptions on the epaulettes or the crescents of various ranks were also fixed. Often they were pious invocations, but commanding officers (raís) had on one of their gold epaulettes 'With those in authority, patience is the key to divine aid'. Any officer or soldier who left off his uniform was rigourously punished."

"The Arab artillery was feeble and antiquated, and consisted of some 20 field pieces and a number of old bronze and iron cannon...three...mounted on poor carriages with solid wheels, the fourth in the European manner. On one...(were decorations of) drums, turbans and crescents.'

All were carried on mule back.

'Cavalry wore baggy trousers and a red jacket covered with a haik and burnous (ssc); the infantry a woolen vest and trousers and a black, hooded jacket.'

Anybody come across these books and can provided more details from them?

I have been pointed at an excellent blog about this, all in French but Google translates it in seconds, by Al Maurer on the Colonial Wars Yahoo DG. It really is the DBs for basic info and some wonderful illustrations - lots of odd variations of uniforms...Here’s a link to part 1; from there you can find the rest:
http://jenevoispaslerapoport.blogspot.com/2014/08/larmee-francaise-la-conquete-de.html

For the Algerians I found the chapter on Chris Flaherty's wonderful Ottoman Uniform site - splendid stuff as always from this chap enhanced by illustrations his own unique style which are just perfect for painting figures...now to find some figures! http://www.ottoman-uniforms.com/ottoman-algeria-army-and-navy/.

The other great source is the entry for Algiers in Matt Bevins excellent self-published 'Tangier to Tehran: A Wargamers Guide to Middle Eastern Armies of the Napoleonic & Pre-Colonial Period c1770-1830', originally published 1994, but there is an updated version 2013 (I think I did a google on Mark Bevis, got an email address and contacted him, but Micro-Mark may have the book?) Splendid information, with lots of naive but very helpful b&w drawings.

I have also had a go at the first unit of French infantry form Conte figures - one painted entirely. I like to do tis as a guide to how they will look so I can change anything which doesn't 'work', colours etc. Will post a photo.
Posted by Mike Blake at 08:41 No comments: